The Morals and Ethics of Robbie Thomas (Robbie Poulton)

For a second, let's pretend that Robbie actually cares about solving crimes and not simply about self-promotion.  And now imagine the following scenario.

Robbie Thomas is, for argument's sake, contacted by a family member who is desperate for hope and answers because they've lost a loved one to murder that remains unsolved.  Robbie, as part of my story, meets with the family or family member and offers them comfort and support and claims that he'll use his psychic abilities to help solve the crime.

Now, given the initial presumption that Robbie Thomas isn't a self-promoter but rather a selfless warrior for justice, what would Robbie Poulton do next?


My suggestion is that the answer to all these questions, if Robbie Thomas had a shred of morality or ethics, would be no.

As mentioned on the Sarnia Skeptic blog and on this site, Robbie has done each and every one of the things listed above.  The final point, however, is one about continually and intentionally twisting the truth by omitting parts of the story.  Specifically, he's gone so far as to crop a picture to make it seem like he's involved in solving a crime - a crime that is, today, unsolved.  And, on top of that, it is a clipping that references the very family that has spent countless hours and untold effort trying to get Robbie Thomas to stop the abuse.

Get ready for it.  Here is a screen clipping from a YouTube capture (see here).  The clipping refers to the Karen Caughlin murder.

The family demands that he stop using her name in promotions so what does he do?  Uses the article with her name cropped out.  As seen, today, on RobbieThomas.net (note the edit to remove the top line of the article and replace the text with a picture to hide the name in the text): 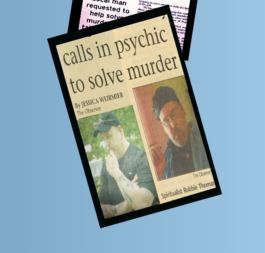 Yes, Robbie is that morally and ethically bankrupt.  He's consistent, for sure.  Consistently fails to demonstrate anything he claims as it relates to psychic abilities, crimes solved or about being selfless.  His 100% failure rate does not make him a scumbag.  Twisting the story to suggest that failures are successes and habitually abusing families already victimized earns him the well deserved title of scumbag.

His 100% failure rate also proves he's not psychic (just like everyone else).

Posted by sarniaskeptic at 12:20 PM