Remember the Psychic Justice Tour? What about ParaCon 2010?

Despite the tour being over, we must remember that it didn't end as Robbie Thomas had predicted.  We know this because his poster suggested that he was doing a lengthy tour and it ended after about half a dozen shows (all with horrible numbers of attendees). 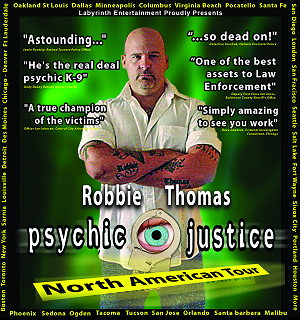 The border of his poster shows the cities that the tour was to include.  Going through them...
Paracon 2010
Robbie Thomas was the organizer of CanAm ParaCon 2010 - held early August at the local Quality Inn.  Since the event we have been able to confirm a number of details.
1.) There was no ghost tour held at the Lawrence House
2.) Less than 40 people (including speakers and family) were in attendance (a Quality Inn employee tells us that there MAY have been as many as 20 people in the room but an attendee says they counted 32 different people including speakers and family members)

Other Notes
Robbie Thomas is no longer advertising his Queen Mary "tour".  Interestingly, when contacted, the staff at the Queen Mary were unaware of who Robbie Thomas was and were not aware of any scheduled tours with him.

Robbie Thomas' "best selling" book has not sold any copies on Amazon which probably means that all customer reviews on other book selling sites are probably fake.

Many of the contributors to this blog have been banned from commenting on Robbie Thomas' videos on YouTube.  If you have a YouTube account, consider adding a comment to Robbie's videos and make reference to this site.
Posted by Stop Robbie Thomas at 12:27 PM